Tobacco Sponsorship and Advertising in Sport

Tobacco sponsorship of sporting organisations, teams, and events in Australia has been banned because of the ethical and public health considerations surrounding tobacco products.

In 1962 the Royal College of Physicians of London published the first comprehensive report on smoking and health, presenting evidence that smoking is a major health hazard. Two years later, the United States Surgeon-General issued a substantial report drawing similar conclusions.

In Australia, tobacco advertising has been banned from television since 1976. State Governments have also responded to the health risks of cigarette smoking by supporting alternative messages, such as ‘quit smoking’ campaigns; similar campaigns have continued for many years as a central strategy in health promotion.

Tobacco in Australia provides an index of research on the detrimental health effects of smoking and exposure to cigarette smoke. The weight of research underpins the decision by sporting organisations to break all ties with tobacco products. Health promotion sponsorship of sporting organisations and sports events was initially used as a replacement for tobacco sponsorship.

VicHealth action agenda for health promotion, VicHealth, (2013). Reduction (and elimination) of tobacco use is still seen as a health promotion issue and this report lists ‘prevention of tobacco use’ as a high priority.  Tobacco smoking is still the leading single preventable cause of disease and death. The less people smoke and are exposed to harmful second-hand smoke, the greater the health gains across the community. To achieve these gains, organisations such as VicHealth have targeted young people, encouraging them to not take up smoking. Sport is a good vehicle for reaching young people and delivering the anti-smoking message. VicHealth and other organisations also continue to build the evidence base that supports anti-smoking; to know what works and ensure that this knowledge is translated into action.

Quit Now, Australian Government, Department of Health. The Quit Now campaign provides information on the health risks of smoking, and what individuals can do to reduce or eliminate their dependence on tobacco use. Tobacco sponsorship and advertising in sport

An advertisement is intended to foster positive attitudes, beliefs, and expectations about a product. When tobacco products are associated with activities such as sport, having a strong appeal to youth, there is an increased risk that smoking behaviour will be seen as acceptable, even desirable. The link between exposure to tobacco promotion and smoking behaviour is well documented. Research has confirmed that the impact of tobacco advertising is significant; even when cultural background, socioeconomic status, or parental and peer smoking behaviour is taken into consideration.

According to Quit Victoria, by 1980 the three largest tobacco companies were also the three biggest sponsors of Australian sport. In 1989 alone, the tobacco industry put $20 million a year into NSW Rugby League and $14 million into Cricket. Because tobacco advertising on Australian television had been banned in 1976, on-ground advertising and naming rights to competitions and events was strategically used by cigarette manufacturers to provide product exposure through sport. During a day’s play of a cricket test, the Benson & Hedges name and logo might appear on television screens for 90+ minutes, but not as a television advertiser. [source: The Sydney Morning Herald, (16 December 1999)]

Tobacco sponsorship and advertising in sport 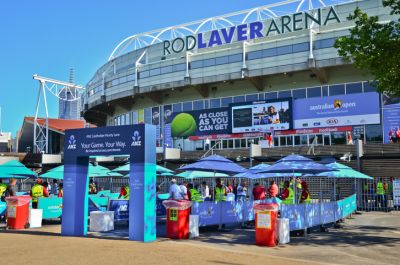 The Western Australian Health Promotion Foundation (Healthway) was established in 1990 and other States developed their own health promotion grant programs through their respective departments of health, or through departments of sport and recreation. The earliest smoking bans were instituted to protect public safety (i.e. smoking ban in cinemas) and public transport (i.e. aircraft, public buses, and trains). The issue of exposure to ‘second hand smoke’ led to the adoption of smokefree policies and legislation, principally by State Governments.  A summary of State legislation appears on the Tobacco in Australia web site.

Public opinion about smokefree environments. The Cancer Council, Victoria, has compiled extensive background information and research references about smoking and exposure to cigarette smoke. The scientific research is unequivocal about the serious health risks of both tobacco use and exposure to second-hand smoke. Public opinion, among both smokers and non-smokers, favours restricting the risks associated with exposure to secondhand smoke. Workplace health and safety legislation has been used to ban smoking in workplaces and child protection legislation has been used to develop smoke free policies in spaces frequented by children. State legislation bans smoking in enclosed sports venues, as well as many outdoor sport and recreation venues. Smoke free legislation has also been adopted by State and Territory Governments and local jurisdictions to cover beaches, parks and many other public areas used for informal sport and recreation.

The sport of baseball has historical links to tobacco product promotion, particularly ‘smokeless tobacco’ (i.e. chewing tobacco). Within the sport, Major League Baseball (MLB) was the first professional league, established in the USA in 1876, and a culture of smokeless tobacco use has flourished ever since. Although cigarette smoking has been restricted or banned from sport for many years, the use of ‘smokeless tobacco’ remains a concern in the USA.

Tobacco legislation in many States in the USA has broadened the prohibition on tobacco products to include smokeless tobacco use in public places and sporting events. The television exposure of MLB players chewing tobacco during competition has served as ‘informal’ advertising and tacit endorsement of tobacco products for many years. Although MLB has not conclusively ruled out the use of smokeless tobacco, the Major League Baseball Players Association has taken a stance. Their campaign to eliminate tobacco use, Knock Tobacco out of the Park, was launched in 2010.

Alcohol Sponsorship and Advertising in Sport